Something happened last night that most parents are utterly terrified of, near bed time a rash appeared. The Wee One had been mostly on the mend yesterday only needing medicine once early on. when we added everything up, especially the lack of high temperature when the rash appeared we diagnosed Roseola ourselves. Fits everything that happened to the Wee One and after googling it, her rash is text book.

She is still on the mend, but still a bit grumpy. We managed some pieces of corn cake today and also tried some birryani for dinner, I think it was a bit too spicy for her though. Some chapati and rice pudding sorted her out. Still not a lot eaten.

We had been doing so well last week with meals getting eaten and it does feel back to square one again. We're hoping as she gets better, her appetite will return as well.

Posted by dougalsgirl at 13:56 No comments:

I got my wish of sleep.

Unfortunately it's because the Wee One isn't well. A wee tummy bug/ear infection. High temperatures, sickness, diarrhoea and sleepiness.

I'd rather go back to sleepless nights knowing she was well.

My doctor suggested not to breastfeed, however this seemed alien to me, and I could hardly deny her of she wanted it. We've only had a few vomits and I'm glad I decided to keep offering the small amount she wants to take. Along with breastmilk, I've been offering cups of water and plain rice and corn cakes. Not much of anything is getting put past the mouth.

Our hearts are breaking for her, she is trying so hard to laugh and play. In fact she even mastered rolling from her back to tummy and then sitting up from there yesterday. But then she gets fed up and needs a cuddle an sleep. We're in the third day now and I'm hoping she's going to feel better soon.
Posted by dougalsgirl at 14:05 No comments:

This Too Shall Pass

It's difficult, we are all still functioning during the day, some days are harder than others. Blogging has not be forefront on my mind during the Wee One's night feeds in the past week, and it is through laziness, I can't deny I'm tired. Trying to make my brain work takes effort that I don't always want to muster.

It's times like this you have to be strong and I look to other breastfeeding mothers in particular for solace. Each one of them who has went through similar has pretty much said, "this too shall pass". If it wasn't for the support of Him, we'd be a different looking family no doubt.

Him has said he worries he looks bad for encouraging breastfeeding and Baby Led Weaning because it makes him look like such a "hands off" dad. Nothing could be further from the truth. It precisely participating in these decisions by standing back and letting breastfeeding and Baby Led Weaning take place that is helping our Wee One develop into a happy, healthy and wickedly cheeky child.

We've been averaging two meals a day in the past week or so and I can quite plainly state that the amount of food consumed is not correlating with the amount of sleep in this household. We've had nights of being up every 45 minutes and nights with only one waking. Nothing seems to explain why.

I take a deep breath when I'm getting frustrated and say, "this too shall pass... It bloody well has to!"

Posted by dougalsgirl at 15:13 No comments:

I swear that since having a baby my brain capacity has halved. Either that or too much of it is taken up with how to look after a baby. I even had to go back and correct halved as I had spelled it with an "f" the first time round. Oh my.

Last night, despite quite lowish temperatures outside, the Wee One has sweated through her sleeping bag. Him and I made an executive decision to take it off and use a blanket instead. The result was a 6 hour stretch and only one night feeding. Also, she slept on her tummy for the first time to our knowledge. We are using the blanket again tonight, hoping for a similar result.

Today was a good day for food. I've taken to carrying plain rice cakes with me and the Wee One snaffles pieces of them like they were sweeties. She also had some French toast, a piece of pork, some red pepper and a fromage frais.

Today also seen two nappies, neither at two o'clock. One was surprisingly mild, but I know now it was clearly to give me a false sense of security. The second one was rank. Vile. But not as much wind as normal, well, not as much noisy wind as usual. The kind of noisy wind that causes physical vibrations through the floor, or, if you are dreadfully unlucky, your leg.

I'm looking forward to tonight, I hope it's a one wake wonder. 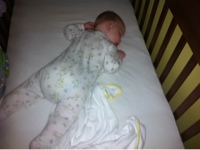 Posted by dougalsgirl at 13:58 No comments:

The Wee One loves yoghurt and fromage frais. She tried yoghurt again last Friday and we've not looked back. Breakfast is still very slow, but lunch and snacks are very much welcomed now.

The past few days have went quite well with food, but we are still having bi-nightly wakings for feeding. I was lucky enough to get the Wee One weighed today and her weight has started plateaued which is great and it's where it should be. It's demonstrating that she is definitely easing into food perfectly. All the worries have been proven to be silly and not needed. Ah well. I doubt it will stop me!

I've got a few good recipes to try over the few days, sweetcorn fritters, lentil wedges and some banana bread pudding. We'll see how it goes.

We also have a road trip on Saturday for a family party, hoping to show off some awesome Baby Led Weaning skills. If anything I know she'll clap, she loves to clap. All the time.

Posted by dougalsgirl at 13:31 No comments:

On Thursday, clapping was mastered. The Wee One now claps at every opportunity. On seeing someone? Clapping! Upset and wanting milk? Clapping! 20 seconds after waking up? Clapping! It's adorable, and along with a "mumumumumum mumma mumma mumumumumum" babble, I'm more tightly wrapped round the Wee One's than ever before.

We had a 7 hour stretch of sleep last night. It was bliss. If it was a fleeting occurrence, I may be a little upset. To combat it, we has breakfast, lunch and dinner today. I opened one 55g tub of fromage frais (with only fruit purée added, nowt else) and it lasted us through all three meals. Toast soldiers for breakfast were barely touched. Rice cake with peanut butter for lunch was sucked on and dinner was my own concoction of Spanish Hash. Dinner was the most successful, she seemed to eat quite a bit, maybe tonight will be a longer sleep again.

I'm so glad we've revisited yoghurt, it's another road into dairy and she seems to like it off the loaded spoon. I keep a right hold of it though to prevent it going everywhere. I let the Wee One guide it in herself, my hand is there to prevent it being used as a catapult.

Tomorrow we will be opening a other yoghurt at breakfast and offer it through the day with her meals. I'm think another wee shot at porridge tomorrow, or maybe finally some French toast made by me.

1. Roughly chop the onion and garlic and add to a pan with a couple of tablespoons of olive oil over a medium heat.

2. Chop the sweet potato and red pepper into large chunks and half the baby potatoes. Add to the pan along with the drained butter beans. Chop the chorizo and add te the pan. Stir for a couple of minutes and then add tinned tomatoes.

3. Add your flour and vegetable stock cube to the bottom of a cup and add a little water to make a paste. Continue to add water and stir to keep the mixture smooth until the cup is full. Add the contents of the cup to pan. If all the ingredients are not covered, top up the pan with water. Cook until the potatoes are soft, approximately 30 minutes.

*I'm adding this note to talk about salt. Chorizo is a cured meat and naturally, quite salty. As with all my recipes, I don't add salt (apart from a tiny amount in bread). The Wee One doesn't eat a soldier of bread yet, so her salt intake isn't much at this point. I'm comfortable giving her some of the stew, without the meat. This is of course a decision you need to make yourself.

Posted by dougalsgirl at 12:47 No comments:

I must admit, only two months in and I've become a Baby Led Weaning evangelist. Anyone I talk to with a baby or not hears about the Wee One's eating habits and more than likely has to sit through a slide show of pictures on my phone (yes, I've turned into one of those mums). I just want people to know there is another option. I will tempt them to the dark side.

I suppose, I've never really went into any of the reasons Him and I decided Baby Led Weaning was the way to go for us. Neither of us has much control over appetite, so that was a good reason to give it a try, we wanted to give the Wee One the opportunity to control her appetite from day one (this is also why I breastfeed on demand) so it led on quite well. I also had gestational diabetes during my pregnancy and by giving the Wee One control of her appetite and hopefully by proxy, her weight, we might help her avoid problems when she's older.

There is also an amazing laziness aspect to Baby Led Weaning that I've found quite pleasant, apart from having some mess to clean up, I don't need to do anything special for the Wee One, she just gets a bit of what we have mostly, it's great. No steaming mountains of veg, mushing up and putting into containers and freezing, defrosting etc. I suppose breastfeeding has made me lazy, maybe of I'd been making bottles all this time, I might have jumped on purées.

So tonight, we went to Ikea and for the first time we bought a children's meal for the Wee One. It included a cheese sandwich, a yoghurt with only fruit puree added and some organic junk free puffs an biscuits and a bit of fruit (which I didn't actually take). Basically it was enough food the feed the Wee One for 2 days. The yoghurt was a massive hit, MASSIVE. She ate around 6-8 spoonfuls, the most food consumed ever. The puffs were a bit hit too. It does grate me a wee bit that she was enjoying this "made for babies" food, but I can't deny it was wonderful to see her eating so well. So much so that I went out and bought some yoghurts for breakfasts and puddings. I also got some puffs. I'm planning on using these sparingly, but I don't see anything wrong with a few one meal a day. 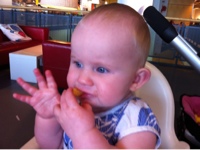 Posted by dougalsgirl at 15:11 No comments: